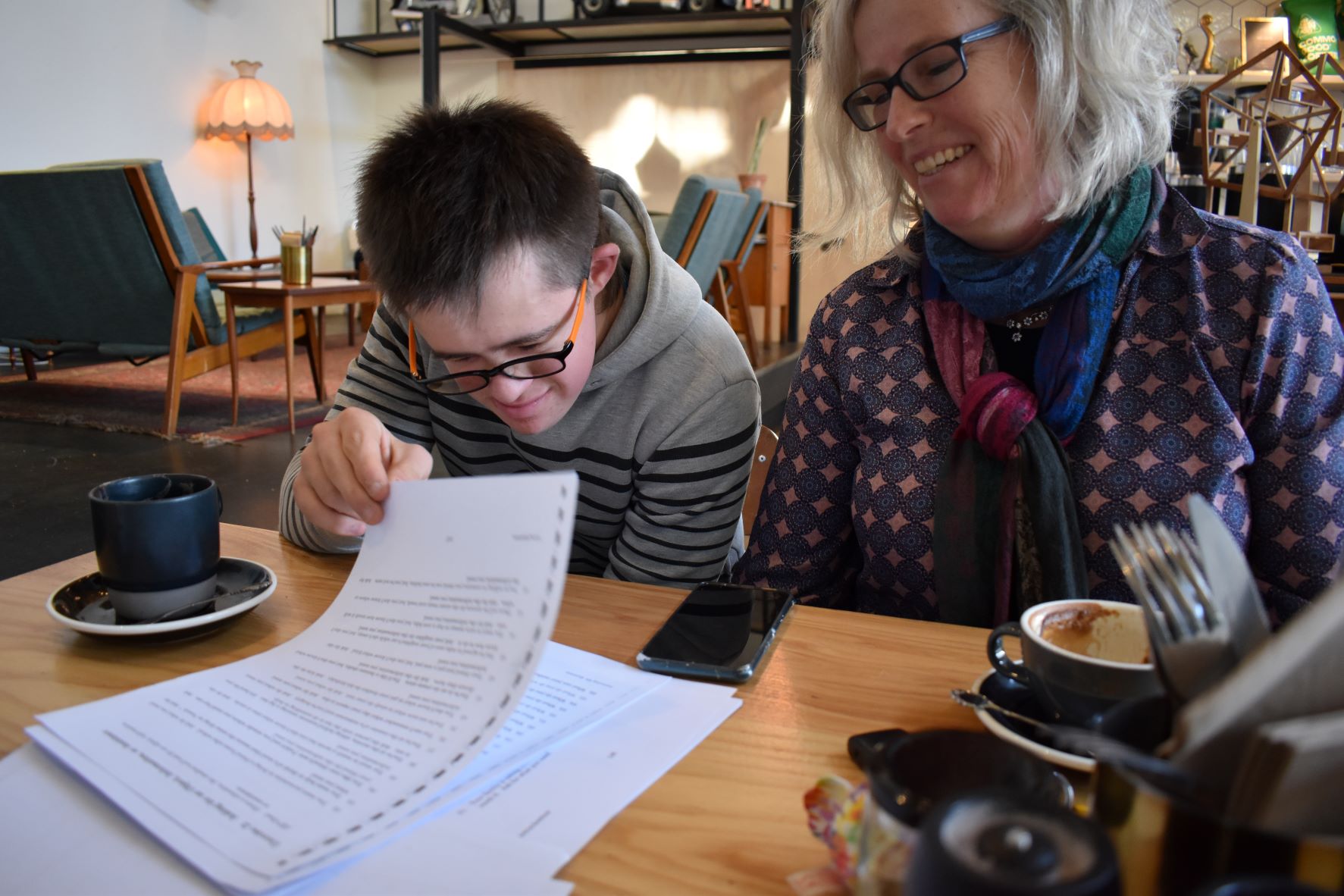 We met Leroy at Crave cafe in the Auckland suburb of Morningside. It was a big moment for me and I felt something akin to star-struck, seeing in person someone whose photo I had become so familiar with over the past few years. Of course, Leroy looked a bit different to the seven-year-old I was used to seeing on my computer screen. Now a high-school student of sixteen, he was joining us along with Mum, Ester, in the midst of a busy school holiday schedule of holiday programmes, assisting with a new paint job at home, and visiting family and friends.

I wasn’t just fascinated to meet Leroy because of the photos he and his speech therapist had taken for UpsideDowns a decade previously. He is one of a cohort who are the first generation of Kiwi kids with Down syndrome to have included UpsideDowns in their journey since infancy. UpsideDowns was founded by a group of Auckland parents in 2003. By the time Leroy and his whānau joined the ranks two years later, a total of just over 20 Auckland children were receiving help for their speech and language therapy costs as a result of the charity. Today, 235 families across Aotearoa are supported by the Trust. Out of those first 20 members, Leroy and two others remain on the UpsideDowns’ books.

For the past fifteen years, Leroy’s speech therapist has been Sarah Goodall. Having that consistency has been invaluable for the family. She’s been there for every step of Leroy’s education journey, keeping his teachers and teacher aides informed and upskilled, prompting them to up their game when necessary, and providing a consistent presence in contrast to those who have sporadically been involved from the Ministry of Education, none of whom have remained from one term to the next.

The under-resourcing of the special education provisions available through the public school system have rendered UpsideDowns’ involvement essential for families like Leroy’s:

“If it wasn’t for UpsideDowns, these kids wouldn’t have access to learning how to talk or read or write because at school there’s just nothing… It’s been so good having Sarah [Goodall] being Leroy’s advocate. She knows his capacity for learning which schools don’t necessarily. For Leroy, he learns much better in a mainstream setting, and Sarah has been willing to help teachers achieve that.”

They’ve had some ups and downs with classrooms and teachers over the years, but Leroy is currently enjoying his high school experience, taking on a full mainstream workload with one assisted study period per week, which often incorporates the resources his speech therapist has provided.

A favourite subject for Leroy is Food Technology, as one of his two main career aspirations is to work in a café (the other being police work). At Crave, our table service was carried out by Amelia, a young woman who also has Down syndrome, which felt even more fitting after learning of Leroy’s career goals. It was when discussing food that Leroy’s ability to communicate really shone through, and his passion for that area was evident. It was easy to picture him working in a similar scenario to Amelia in the not-too-distant future.

Outside of his school work, Leroy is involved in Scouts, StarJam, church youth group, drum lessons, and basketball. His Mum says, “Whenever he has had to learn a new social skill or unlearn an unhelpful one Sarah has helped him or his teachers with social stories and rules to make it plain to him what is expected.”

When Leroy became a member of UpsideDowns, that group represented 2% of the total number of children with Down syndrome in Aotearoa New Zealand, and all were based in Auckland. Our membership today accounts for 29% of the total and is nationwide. That means 71% of Kiwi kids with Down syndrome still aren’t getting the support they need to realise their potential – though it’s certainly an improvement on 98%.

What that increase does mean, is that the landscape for these young people is changing. Where Leroy was once the significant minority, educational achievement, high school graduation, fluent communication, employment, and independent living are becoming the expectation rather than the exception for this community. And the effect is one that snowballs. As the number of young people with Down syndrome enter mainstream classrooms, community groups, and the workforce increases, the negative expectations and fear borne out of ignorance is subverted, making the path just that much easier for those who follow.

As Ester told us,

“Having this therapy help from Sarah who has helped so many children with Down syndrome navigate their way through the maze of unspoken social rules has been invaluable.”

Of course, speech and language therapy is only one part of that equation, but it is certainly significant. Those parents who first got together in the early 2000s could see how, by investing in this one crucial aspect of a person’s life, you could unlock so much more. Their legacy is that a growing number of young people like Leroy have enjoyed the consistent, professional, individualised support throughout childhood that research from all over the world has been recommending for decades, in order for young people with Down syndrome to realise their full potential, and live longer, healthier, happier lives:

“Speech and language therapy is the most important part of intervention services for children with Down syndrome if we wish to promote their cognitive and social development.” (Buckley and Le Provost, 2002).

For something so dry, our database of speech therapy invoices can tell some remarkably articulate stories. Looking back through fifteen years, 198 sessions, and over $30,000 of funding from UpsideDowns, I’m incredibly proud of the work UpsideDowns has done to walk alongside Leroy. It’s exciting but intimidating the sheer number of others who we’re currently funding, those on our waitlist hoping to be given funding soon, and knowing the volume of others out there who need this intervention. What’s even more astounding, is that all this has been achieved without any government funding, and, for most of the charity’s history, almost entirely as a result of dedicated volunteer work – fundraising quizzes, dinners, mufti days, and sausage sizzles, and of course, many, many grant applications.

UpsideDowns has the same life-long commitment we’ve made to Leroy with over 200 others like him, because we know that’s what works for these kids. Yet only 6% of what that costs each year is regular – the rest depends on hard work and a lot of luck. You can help us change this by becoming a regular giver to UpsideDowns for as little as $5 a month – that’s only 16 cents a day!

Meeting Leroy was an exciting glimpse into the future for the kids we fund. A future not of silence and hidden lives, but of distinct personalities, making their way in the world and having their voices heard in communities across Aotearoa.